YDNPA Planning Meeting to turn down planning application for pub

A community pub went a step nearer with the decision of the YDNPA Planning Meeting to turn down a planning application for the Forrester’s Arms at Carlton in Coverdale.

The application was to turn the kitchen, restaurant, and bedroom area of the public house into housing. A member of the recently formed Coverdale Community Pub Management Committee Mr Peter Pearson addressed the meeting held at the National Park Authority Office Bainbridge last week

Mr Pearson pointed that for the Foresters Arms to be viable as a public house it should stay as one complete and entire building as it was originally. It also needed to offer restaurant facilities and letting rooms as well as a thriving bar.

The community group made reference to the article in the Darlington and Stockton Times, which prompted support. They now have an interactive web site up and running have published two newsletters.

Future plans for the pub include a drop in coffee shop, a book exchange within the pub, support for local sports teams, youth activities, and the elderly. They also plan a definitive history of Coverdale to be written, photographed, and recorded for future generations.

A spokesman for the YDNP provided the following statement from the Chairman of the Committee, Graham Dalton, "The Planning Committee gave a great deal of thought to this proposal. In the end they were concerned that converting part of the pub to housing would leave a business that lacked the variety and flexibility of use to ensure that this important community facility was retained in the village. As such the proposal would be contrary to Local Plan Policy which seeks to resist development that would result in the loss of or have an unacceptable effect on an existing community facility."

Chair of the Coverdale Community Pub Management Committee Mr Raymond Brown speaking following the decision said,“ The future of the Foresters Arms will be secure with us. We are continuing to receive pledges of support and would like more. I am pleased with the decision of the planning committee.”

Details of the plans progress and the group’s newsletters can be found at www.coverdalecommunitypub.co.uk, along with how to pledge your support. 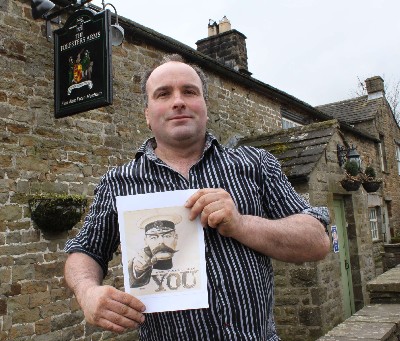 Pictured above raymond Brown - Chair of the community Pub committee